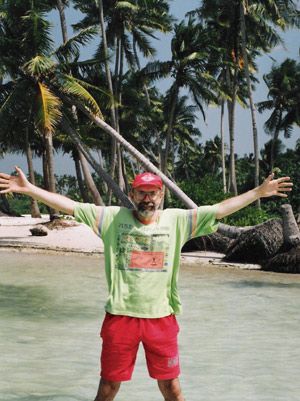 The first book which he read on his own was The Adventures of Robinson Crusoe by Daniel Defoe. It was then that he decided that he wanted to be a traveller. At the age of nine he spent his holidays at the Polish seaside. It rained almost the entire month, hence every day he visited the local library where he read a mountain of travel books, which even more strongly confirmed in him his desire to explore the world. It was also at this time that he learnt about the existence of the Easter Islands and made it one of his goals to get there (which he did  40 years later). He spent al his free time at primary school reading travel books, building models of ships and going on bike rides. His favourite television programme was “The Flying Dutchman”, which was all about seafaring . He also won a national competition “Poland on the Baltic”. At high school he decided he wanted to be an officer in the merchant navy and explore the world in this way. He competed in  the Navigation Olympics and as one of the winners was allowed to enter the Maritime University. However, because of his significantly impaired vision he was unable to bring his plans to fruition. He then set his mind to becoming a doctor, because as a ship’s physician he would be able to sail the world’s seas and oceans. As part of his preparations for the medical entrance exam  he won a national nature competition. Thanks to his studies in Krakow and the wonderful student life it offered he was able to pursue his keen interest in travel and sailing. He became a member of the Krakow Yacht Club and first went sailing on the Masurian Lakes and later made a number of voyages by sea. With his friends from the medical students’ Esculap Club he also explored Polish mountains and hitchhiked to neighbouring countries in Eastern Europe. As the opportunities arose he began to travel to more and more distant countries in Europe.  He had an unexpected opportunity to see the “big wide world” when he managed to travel to the USA to see family.  With some travel experience under his belt he then founded the tramping department at the Krakow branch of the Almatur students’ travel office with the aim of organising trips and expeditions (in 1979 it was renamed the Krakow Club of Organisers of Tramping Expeditions „Tramping Club”). He also created BIT (Tramping Information Bank), i.e. an archive of notes on trips and journeys. On finishing his studies he organised and led an expedition through the Middle East by truck, which passed through Turkey, Iraq, Syria and Jordan. The travelling bug did not prevent him from graduating on schedule from the Faculty of the Krakow Medical Academy. However, an important change had taken place in his life – at the beginning of his studies he had planned to become an internist but … he fell in love with radiology and began to specialise in this area of medicine. In the next few years he divided his time between work at the Department of Radiology at the Cracow  Academy of Medicine and travelling to countries located on different continents. In 1979 he published a handbook called „The Tramping Handbook”, the first publication of its kind for globetrotters in Poland. The following years brought more travelling. He published the notes he had gathered in numerous articles, primarily in the tourist magazine Swiatowid, a publication in which he co-operated. In 1985 he organised OSOTT – a national meeting of travellers, the first such undertaking of its kind in Poland. He had hit the bull’s-eye with this publication as it was exactly what Polish globetrotters needed. In 1986 he became the author of the first Polish guidebook for globetrotters “The Tramping Guidebook – Burma, Thailand, Malaysia, Singapore, Indonesia”.  Shortly afterwards he began to write and publish a guidebook about China. Materials about the Country of the Centre proved to be so precious and that they were snapped up by a leading global travel publisher. He immediately spent the money he earned on a solo trip around the world which took him six months (1988). In 1988 – 92 he worked at the Academy of Medicine in Gdansk. He spent his free time sailing, travelling and writing articles (he was the senior editor of the globetrotter magazines – Globtroter and Travel). At the end of 1991 and the beginning of 1992, he travelled around the world once more for three months – although this time by a different route. In 1993 he began working once more at the Department of Radiology CMUJ in Krakow. His professional obligations began to make travelling on the same major scale as previously impossible, but he still managed to visit more than 100 countries in Europe, Africa Asia, both Americas, Australia and Oceania. In 1993 – 1996 he presented the television programme „Across the world” and in 1996 began to publish a series of books under the same title (“Across the World – Tourist Information From All Over the World”) with accounts of trips from Poland’s best known travellers. At the end of the 1990s he became one of the few people in the world to have a chance to carry out research on Egyptian mummies using computer tomography based on advanced image processing technology (a virtual tour through the interior of the mummy or giving a life-like reconstruction of the face; everything is done without having to unwrap the objects of the research) He still organises OSOTT (The National Meeting of Globetrotters, Tramps and Tourists), which has become a cult event in the Polish travelling community.  In 2006 he won Poland’s most prestigious travelling accolade, the “Special Kolos Award”  „for his pioneering work in creating the Polish globetrotting community and his many years’ of devotion to helping young people fulfill their travelling desires”.